NRC (Mischa Spel)  “Wonderful! In everything, this CD stands out by the care and love of the makers.
The thematic selection (love and war) is meaningful and up-to-date……Florian Just has an elegant baritone, perfectly suited for this repertoire.”Nederlands Dagblad (Frans Tijssen): Baritone Florian Just’s album Éternelle Dualité is an exceptionalrelease for several reasons. If only because of the beautiful 92-page booklet, which appears as a hardcover, in three languages(English, German, French) and with a detailed description of the selected repertoire and the lyrics…

De Liedvriend (H. Posthuma de Boer): With his warm, versatile baritone and flawless diction, the singer lives up to this repertoire. Tender and devoted when it comes to love, fierce and combative when war is involved. Wonderfully assisted by piano, flute and cello. The richly illustrated CD booklet provides extensive information about the composers and performers. Recommended! 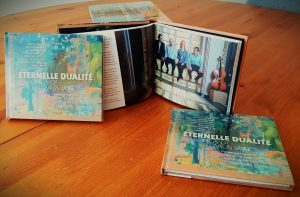 For our 2nd major CD production flutist Julie Moulin and cellist Stephan Heber set out with me and my regular pianist Jan Paul Grijpink in a sparkling French-language program
Éternelle Dualité ~ Songs of Love and War.
Those two opposites seem irreconcilable, but often have their roots in a similar existential need – our everlasting search for spiritual companionship.

This CD goes on a journey into the realms of those great emotions that define our being and actions so strongly. Be seduced by Caplet’s invisible flute, hear Dallapiccola causing Charlemagne to have ominous dreams, immerse yourself in Duparc’s impenetrable melancholy, Massenet’s gripping passion, Wagner’s Francophile patriotism and Ravel’s exotic extravagance. The unusual cast of voice, piano, cello and flute is rarely found in other compositions and it was also clear that on our search in ‘Fin de siècle’ musical France, one could quickly lose oneself in the sweetly soporific mode of the ethereal shepherd’s flute music. So we took arranger and composer Wijnand van Klaveren on board. He wrote some  marvellous arrangements  for our group resulting in 7 world premiers on this CD.

The CD was released on October 1st 2022 on Etcetera Records.